Dissolving City is a scale model of Kowloon Walled City made from water-soluble material. Over the course of the year, rain and other inclement weather will erode the city until it vanishes.

Recently, I’ve thumbed through a wealth of photographs showing New York City. My day job as a photo researcher has demanded it of me. Looking at all these images, I’ll ask myself if the apocalypse is something that is currently being constructed (like condos) or just the casual destruction of weather. Surely, the Barclay Center is a sign of the apocalypse. But then there is Sandy, too.

Our collective future as urbanites lies in our ability to cope with natural disaster and poor design. The answer? Disposable, or better yet, biodegradable housing. Instead of permanent structures that are difficult to clean up after our increasing exposure to the pitfalls of extreme weather, biodegradable—no! dissolvable housing will offer a no-fuss, no-muss approach to living. Like a lizard detaching its tail in an emergency, dissolvable housing is the revolutionary approach to urban development. It has a built-in escape plan.

How does one build a dissolvable city? Well, originally I was considering casting my city in materials like sugar or perhaps salt, maybe even seeds. I would cast them into bricks and build up my city one brick at a time. But food-based materials would just create a rat den. Luckily innovations in manufacturing have made fabrication cartoon easy. No molds, no casting, no carving needed to make an artist feel skilled. It’s just not necessary anymore. I’m talking about the MakerBot! The MakerBot is a three dimensional printer that uses printer technology to create precise objects in 3D. And the MakerBot offers a PVA filament that is water-soluble. PVA stands for polyvinyl alcohol plastic, and it disintegrates like aspartame in water.

Ideally, I’d like my Kowloon Walled City to be about the size of a sedan. The fiscal research I’ve done indicates that 5K would fund a doghouse size model. MakerBot, a Brooklyn-based company, could possibly be wooed into allowing me to rent instead of purchasing one of their 3K printers. Either way, our budget can fund a substantial object, enough to withstand a season or so’s worth of rain. I am excited to test out the filament for durability.

The point though, really, is watching the erosion of a city. Kowloon Walled City was founded during the Song Dynasty 960-1279 in Hong Kong. It doesn’t exist anymore. It was missing its walls for a century, then demolished in 1994. But the memory of its history lives on as a trade outpost, a coastal fort, a British tourist attraction, a Chinese refugee camp, a squatter’s enclave and a subcity governed by organized crime. It was built organically within barricades. Without the guide of architects, it came up shanty-style and vertical. The intricate system of passageways evoked a multistory labyrinth without sunlight. Kowloon housed 33,000 people when it was destroyed. Photos of it remind me of the Borg’s cube-shaped ship. Please see the image section for your reference. I’d like to display our model city on a platform so we can watch the dissolving filament drain to a proper edge and fall off in drops, as if its own world was flat.

This proposal is somewhat of a departure from my 2012 portfolio. The rest of my work this past year has been kinda sexy, meaning it deals with sex. I am divided between making art about the timorous lust of having a body and the communal sheltering of it. I connect the two with the word body, summing up this addition to my work as a desire to address the urban body as a shared corporeal terrain and protectorate.

Dissolvable City is a confrontation between two worlds on the grounds of Socrates Sculpture Park. To the west, will be a view of our fair Manhattan paired with the disintegrating model of a third world ghost city placed at the foot of the viewer. 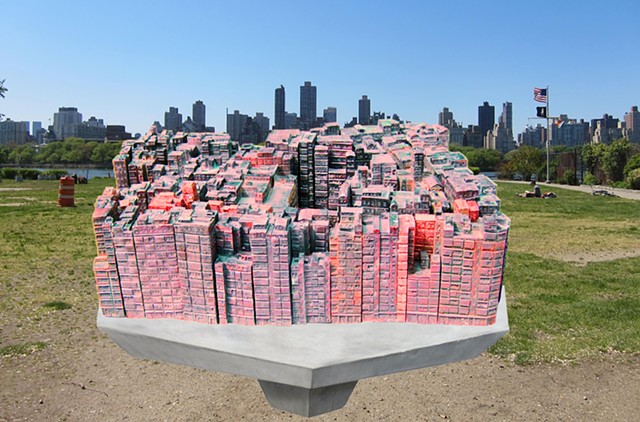